Aberfeldy Angling Club first started in April 1887. I quote from the first minute book of the club which reads:

The present day angling club has Scott Milne as president and Norrie Shaw as vice president, with a working committee of 9 members, who all take an active part in managing the club and looking after the river and Loch-na- Craige.

In 1964 the club was given the salmon rights of the town water on the River Tay by the widow of Provost Haggart. The club has also the trout fishing on Bolfracks Estate to the west of Aberfeldy and to the east they have trout fishing on The Lagg, Tombuie, Derculich Estate, Grandtully Timeshare, Pitcastle, Wester Coshieville, Findynate, Sketewan and Ballintaggart.

Each year the club holds 5 river competitions during April, May and June. And during the summer months they have 6 loch competitions, when they visit several fisheries lochs in and around Perthshire and Fife.

The club for many years had the fishing on Loch-na Craige, which was originally given to the club by Mrs Halfords father, but on her selling the estate the club lost the fishing. However when the present owner took over the fishing after about 2 years he offered the club the use of the loch and have enjoyed good sport on the loch since. Unfortunately the present owner is trying the sell the loch. At present the club is permitted to fish Loch-na-Craige, but this is only available to full members.

The River Tay is presently covered by the River Tay Catchment Protection Order 1986, making it a criminal offence to fish the water for any freshwater fish without written permission. This also extends to all tributaries of the river and to all lochs which flow into the river, and as such covers Loch-na-Craige. Many people were against the introduction of the Protection Order but after 19 years of its existence it has been seen that the quality of the trout fishing has greatly improved. 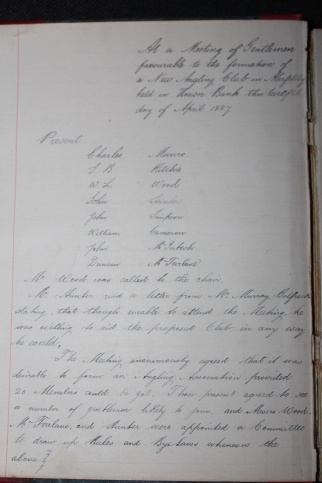